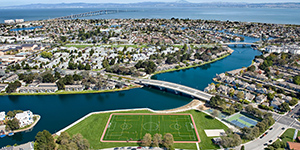 Foster City, a recreation lovers paradise! Foster City was developed in the 1960's with recreation at the forefront. With about 19 parks made up of more than 100 acres all surrounded by an intricate and gorgeous lagoon system. Featuring a beautiful levee that lays along the San Francisco Bay, which is popular among cyclists, runners and families as well as many public parks, basketball courts, tennis courts and soccer fields. Adding to the recreation possibilities is a expansive 9 hole golf course with stunning water views. What truly makes Foster City unique is the gorgeous 212 acre man-made lagoon system which offers truly magnificent water views for the homes and condos built just at it's side. Families find Foster City to be a perfect place with all of the recreation possibilities and home to some of the highest rated schools along the peninsula.

Named after T. Jack Foster, a real estate mogul who owned much of the land and was instrumental in it's development. Originally the land was known as Brewer's Island, Foster City was developed over a 20 year span and is now home to Visa International, Sony Playstation and the Dummy's book series.

In 2008 Foster City was named by Money Magazine as one of the country's best places to live.