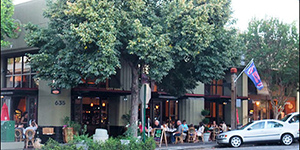 Menlo Park’s first permanent settlers arrived from Menlough on the outskirts of Galway, Ireland, in 1853. Two Irish immigrants, Dennis J. Oliver and his brother-in-law D.C. McGlynn, found the tree-studded pasture land reminiscent of their homeland and purchased a 1700-acre tract at the southern end of the Pulgas Grant, along El Camino Real, known then as County Road.

In 1854 Oliver and McGlynn erected a wooden gateway to their property. On the center main arch in foot-high letters was the name “Menlo Park.” The gates stood on the west side of El Camino Real about 500 feet south of the present-day Menlo Avenue, until demolished by a motorist in 1922.

Adjacent to Stanford University, Menlo Park is the birthplace of Google and is strongly associated with the technical boom in Silicon Valley. The city is between the business centers of San Francisco and San Jose, easily accessible to each by car or train.

Long known as an intellectual and cultural mecca, Menlo Park is also bordered by coastal hills on the west and the San Francisco Bay on the east and offers a wealth of outdoor recreational activities within a few minutes’ drive.